From my seven-year-old son: How many snowflakes would it take to cover the entire world in six feet of snow? (I don't know why six feet...but that's what he asked.)

It's been too hot where I live, so I like thinking about this question!

Snow is fluffy because it has a lot of air in it. The same amount of water that makes an inch of rain would make a lot more than an inch of snow.

An inch of rain is usually equal to about a foot of snow, but it depends on what kind of snow it is. If the snow is light and fluffy, an inch worth of rain could make over 20 inches of snow! 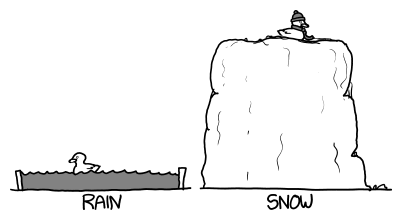 All the clouds in the world, combined, hold about 13 trillion tons of water. If all that water were spread out evenly and all fell at once, it would cover the Earth with an inch of rain—or a foot of snow.

Most of the Earth is ocean. If we only made water fall on land, there would be enough for three or four inches of water. That's how much falls in a very big rainstorm.

If you leave the snow there, it will slowly get less and less deep as it settles down and compacts. This means that even if six feet of snow fell everywhere, it would only be six feet at first. Before long, it might be five feet. (This happens to humans, too. You get shorter throughout the day as your body compresses a little!)

This can make it hard to record exactly how much snow falls, and sometimes even weather experts have a hard time! If you wait until the end of a snowstorm to measure snow, maybe it will have all squished down, or some of the snow might have melted, so your measurement will be too small.

Instead of waiting until the end of the storm, you can measure the snow in parts. You let some snow fall, measure it, then clear it away and wait for more snow to fall.

You have to decide how much snow to clear away. If wait too long, the snow might become too squished, but if you measure it too often, it will all be light and fluffy and you'll get a number that's way too high.

Believe it or not, the National Weather Service has written special guidelines for how often to clear away snow, so everyone can measure it the same way. They use a special snow-measuring board, which is probably just a regular piece of wood, but I like to imagine that they treat it like a precision instrument and store it in a special locked case until it's needed. 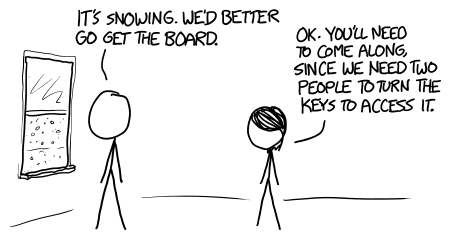 The official guidelines say that you should clear the snow-measuring board every six hours. A few years ago, there was a big snowstorm, and the Baltimore airport measured 28.6 inches of snow. That would have been a new record. But then the National Weather Service learned that the person measuring the snow had cleared the board every hour, instead of every six hours. So they didn't know whether to count the record or not.

I didn't see what they ended up deciding, because four days later, another blizzard hit Baltimore and everyone suddenly had more important things to worry about. (Then there were more after that one. It was a snowy winter.)

Still, people have never seen a winter with six feet of snow across the entire world. A snowfall like that would—to answer the original question—take a total of about a mole of snowflakes, give or take a few zeros. With that much snow, every one of the 70 million kids in the United States would be able to make enough snowballs to hit every other kid with a snowball three times over.

Or you could keep some of the snowballs for yourself. Right now, in the hot weather where I live, that sounds wonderful. 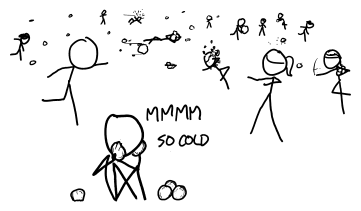