What if a rainstorm dropped all of its water in a single giant drop?

It’s midsummer. The air is hot and heavy. Two old-timers sit on the porch in rocking chairs.

On the horizon to the southwest, ominous-looking clouds begin to appear. The towers build as they draw closer, the tops spreading out into an anvil shape. 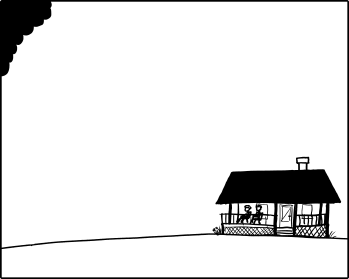 They hear the tinkling of wind chimes as gentle breeze picks up. The sky begins to darken.

Air holds water. If you walled off a column of air, from the ground up to the top of the atmosphere, and then cooled the column of air down, the moisture it contained would condense out as rain. If you collected the rain in the bottom of the column, it would fill it to a depth of anywhere between zero and a few dozen centimeters. That depth is what we call the air’s total precipitable water.

Normally, the TPW is one or two centimeters.

Satellites measure this water vapor content for every point on the globe, producing some truly beautiful maps.

We’ll imagine our storm measures 100 kilometers on each side and has a high TPW content of 6 centimeters. This means the water in our rainstorm would have a volume of:

That water would weigh 600 million tons (which happens to be about the current weight of our species). Normally, a portion of this water would fall, scattered, as rain—at most, 6 centimeters of it.

In this storm, all that water instead condenses into one giant drop, a sphere of water over a kilometer in diameter. We’ll assume it forms a couple kilometers above the surface, since that’s where most rain condenses. 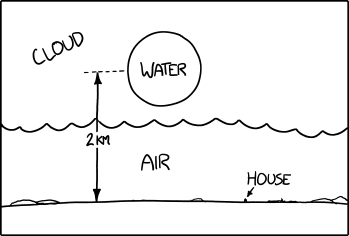 The drop begins to fall.

For five or six seconds, nothing is visible. Then, the base of the cloud begins to bulge downward. For a moment, it looks a little like a funnel cloud is forming. Then the bulge widens, and at the ten-second mark, the bottom of the drop emerges from the cloud. 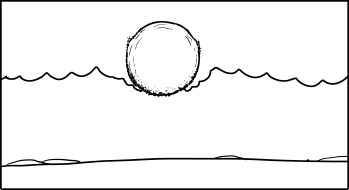 The drop is now falling at 90 meters per second (200 mph). The roaring wind whips up the surface of the water into spray. The leading edge of the droplet turns to foam as air is forced into the liquid. If it kept falling for long enough, these forces would gradually disperse the entire droplet into rain.

Before that can happen, about 20 seconds after formation, the edge of the droplet hits the ground. The water is now moving at over 200 m/s (450 mph). Right under the point of impact, the air is unable to rush out of the way fast enough, and the compression heats it so quickly that the grass would catch fire if it had time. 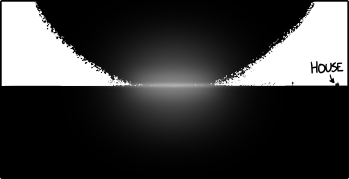 If you were floating in the center of this sphere during this episode, you wouldn’t have felt anything unusual up until now. It’d be pretty dark in the middle, but if you had enough time (and lung capacity) to swim a few hundred meters out toward the edge, you’d be able to make out the dim glow of daylight.

As the raindrop approached the ground, the buildup of air resistance would lead to an increase in pressure that would make your ears pop. But seconds later, when the water contacted the surface, you’d be crushed to death—the shock would briefly create pressures exceeding those at the bottom of the Marianas Trench.

The water plows into the ground, but the bedrock is unyielding. The pressure forces the water sideways, creating a supersonic omnidirectional jet that destroys everything in its path.

The wall of water expands outward kilometer by kilometer, ripping up trees, houses, and topsoil as it goes. The house, porch, and old-timers are obliterated in an instant. Everything within a few kilometers is completely destroyed, leaving a pool of mud down to bedrock. The splash continues outward, demolishing all structures out to distances of 20 or 30 kilometers. At this distance, areas shielded by mountains or ridges are protected, and the flood begins to flow along natural valleys and waterways.

The broader region is largely protected from the effects of the storm, though areas hundreds of kilometers downstream experience flash flooding in the hours after the impact.

News trickles out into the world about the inexplicable disaster. There is widespread shock and puzzlement, and for a while, every new cloud in the sky causes mass panic. Fear reigns supreme as the world fears rain supreme, but years pass without any signs of the disaster repeating.

Atmospheric scientists try for years to piece together what happened, but no explanation is forthcoming. Eventually, they give up, and the unexplained meteorological phenomenon is simply dubbed a “Skrillex Storm”—because, in the words of one researcher, “It had one hell of a drop.”