In today’s article, I give short answers to several reader questions.

How long would the Sun last if a giant water hose were focused upon it? My sixth grade brother, Adam, asked me this.

Your brother might be surprised to learn that the water would actually make the Sun hotter!

Water is made of hydrogen and oxygen, which is fuel for the Sun’s fusion. But more importantly, the extra mass also makes the Sun heavier. This crushes it together more tightly and makes fusion happen faster. This means it will burn more brightly and run through its fuel more quickly.

As you keep adding water, the Sun will go through a lot of wacky fusion phases. (During one phase, called a helium flash, the reaction rate is proportional to the 40th power of the temperature—which is probably the largest exponent I’ve ever seen in a physics equation!)

But one way or another, eventually the whole thing will collapse in on itself, blow off its outer layers, and become a black hole. This black hole will keep soaking up water, spraying off X-rays in the process, until finally the municipal water department notices what you’ve been doing and shuts off your service.

What if you shined a flashlight (or a laser) into a sphere made of one-way mirror glass?

Believe it or not, you’ve been lied to all your life—there’s no such thing as one-way mirror glass.

Glass either lets light through or reflects it, but there’s no glass that lets light through one way and reflects it the other way. The glass in police shows is partially reflective (on both sides).  The key is that the room on the prisoner’s side is brightly lit, so the reflection washes out the small amount of light from the observers’ side. 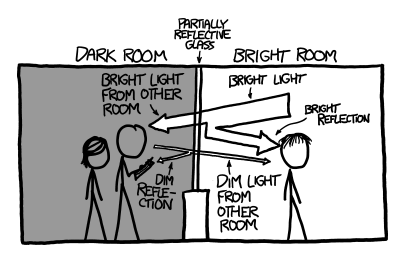 If Michael Phelps could hold his breath indefinitely, how long would it take for him to reach the lowest point in the ocean and back if he swam straight down and then straight back up?

He’d most likely black out and die somewhere between 100 and 400 meters. 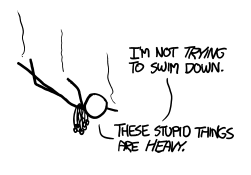 The human body handles pressure remarkably well. With the right preparation, we can survive pressures over a dozen atmospheres. Different body systems break down at different depths, but one of the trickiest limits is created by High Pressure Nervous Syndrome. Below about 100 meters, divers become jittery and excitable (especially if the pressure increase is rapid), and at the same time begin slipping in and out of sleep. The reason may be direct pressure on the brain.

But let’s suppose Michael Phelps were immune to all those things. In that case, it simply becomes a question of speed.

There aren’t very many records for underwater swimming, but based on how quickly this guy completed the 50m backstroke, it would probably take Michael about ...

In the first Superman movie, Superman flies around Earth so fast that it begins turning in the opposite direction. This somehow turns back time [... ] How much energy would someone flying around the Earth have to exert in order to reverse the Earth's rotation?

Someone recently blew my mind by telling me I’d been misinterpreting that scene all my life. I like their take on it way better:

Superman wasn't exerting a force on the Earth. He was just flying fast enough to go back in time. (Faster than light, I guess? Comic book physics.) The Earth changed direction because we were watching time run backward as he traveled. It didn't actually have anything to do with the direction he was flying.

Now that I see it, it makes a lot more sense. I mean, as much sense as a red-cape-and-outside-underwear time traveler can make.

A discussion of the reversal of the Earth’s spin—and what that even means—will have to wait for another article.

How fast would you have to go in your car to run a red light claiming that it appeared green to you due to the Doppler Effect?

What would happen if you opened a portal between Boston (sea level) and Mexico City (elev. 8000+ feet)?

Bernoulli’s principle gives us this estimate of the air flow rate:

That’s fast enough to strip up the pavement from a parking lot. I suggest we put it in Kendall Square—the MIT folks are probably used to dealing with this kind of thing.

When my wife and I started dating she invited me over for dinner at one time. Her kitchen had something called Bauhaus chairs, which are full of holes, approx 5-6 millimeters in diameter in both back and seat. During this lovely dinner I was forced to liberate a small portion of wind and was relieved that I managed to do so very discretely. Only to find that the chair I sat on converted the successful silence into a perfect, and loud, flute note. We were both (luckily) amazed and surprised and I have often wondered what the odds are for something like that happening. We kept the chairs for five years but despite laborious attempts it couldn't be reproduced.

This ... isn’t actually a question. 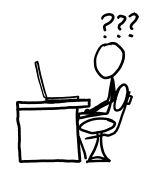 But thank you for sharing!