What place on Earth would allow you to freefall the longest by jumping off it? What about using a squirrel suit?

The largest purely vertical drop on Earth is the face of Canada's Mount Thor, which is shaped like this: 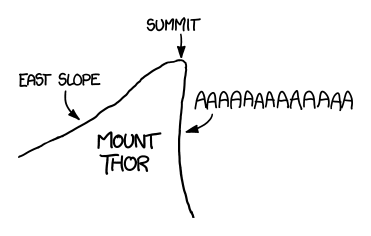 To make things a little less gruesome, let's suppose there's a pit at the bottom of the cliff, filled with something fluffy—like cotton candy—to safely break your fall. 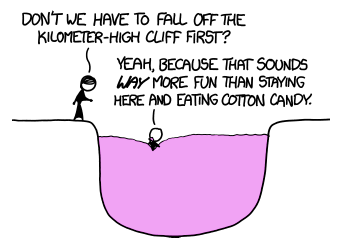 A human falling with arms and legs outstretched has a terminal velocity in the neighborhood of 55 meters per second. It takes a few hundred meters to get up to speed, so it would take you a little over 26 seconds to fall the full distance.

What can you do in 26 seconds?

For starters, it's enough time to get all the way through the original Super Mario World 1-1,[1]Super Mario 1-1 speed run assuming you have perfect timing and take the shortcut through the pipe.

It's also long enough to miss a phone call. Sprint's ring cycle—the time the phone rings before going to voicemail—is 23 seconds.[2]Sprint ring cycle (For those keeping score, that means Wagner's is 2,350 times longer.)

If someone called your phone, and it started ringing the moment you jumped, it would go to voicemail three seconds before you reached the bottom. 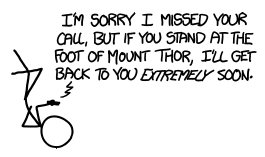 On the other hand, if you jumped off Ireland's 210-meter Cliffs of Moher, you would only be able to fall for about eight seconds—or a little more, if the updrafts were strong. That's not very long, but according to River Tam, given adequate vacuuming systems it might be enough time to drain all the blood from your body.

So far, we've assumed you're falling vertically. But you don't have to.

Even without any special equipment, a skilled skydiver—once they get up to full speed—can glide at almost a 45-degree angle.[3]Glide data By gliding away from the base of the cliff, you could conceivably extend your fall substantially. 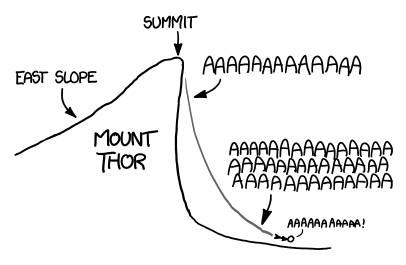 It's hard to say exactly how far; in addition to the local terrain, it depends heavily on your choice of clothes. As a comment on a BASE jumping records wiki puts it,

The record for longest [fall time] without a wingsuit is hard to find since the line between jeans and wingsuits has blurred since the introduction of more advanced ... apparel.

Which brings us to wingsuits—the halfway point between parachute pants and parachutes.

Wingsuits let you fall much more slowly. One wingsuit operator posted tracking data from a series of jumps.[4]Jump. Fly. Land., Air & Space It shows that in a glide, a wingsuit can lose altitude as slowly as 18 meters per second—a huge improvement over the normal rate.

Even ignoring horizontal travel, that would stretch out our fall to over a minute. That's long enough for a chess game. It's also long enough to sing the first verse of—appropriately enough—REM's It's the End of the World as We Know It followed by—less appropriately—the entire breakdown from the end of the Spice Girls' Wannabe. 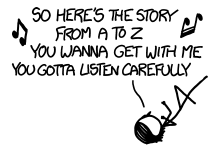 When we include horizontal glides, the times get even longer.

There are a lot of mountains that could probably support very long wingsuit flights. For example, Nanga Parbat, a mountain in Pakistan, has a drop of more than three kilometers at a fairly steep angle.[5]Prof. Dr. Herrligkoffer, The East Pillar of Nanga Parbat, The Alpine Journal (1984) (Surprisingly, a wingsuit still works fine at those altitudes,[6]The Guestroom - Dr Glenn Singleman and Heather Swan [7]Highest BASE jump: Valery Rozov breaks Guinness world record though the jumper needs oxygen and glides a little faster than normal.)

So far, the record for longest wingsuit BASE jump is held by Dean Potter, who jumped from the Eiger—a mountain in Switzerland—and flew for three minutes and twenty seconds.[8]Dean Potter, Above It All

What could you do with three minutes and twenty seconds?

If we can find a way for them to operate wingsuits while eating at full speed, and they jumped from the Eiger, they could—in theory—finish as many as 45 hot dogs between them before reaching the ground ... pass

... which would, if nothing else, earn them what just might be the strangest world record in history.