If you could teleport to a random place of the surface of the Earth, what are the odds that you'll see signs of intelligent life?

The surface of the Earth is about 70% water, so you'll usually plop down into the ocean.

But even there, you could find signs of human habitation.

In one way or another, humans have altered every square meter of this planet. But we'll start with the obvious: Roads, houses, and fields.

To get an idea of how often Borislav would stumble across such obvious structures, I loaded up a sample of random geographic coordinates[1]Generating uniform points on a sphere is tricky—you can't just pick a random latitude and a random longitude. The solution is to either do a bunch of math or use something like GeoMidpoint's Random Point Generator. in Google Earth.

Most of the points were over open ocean, out of sight of any land. Once you get away from the major ports, the odds of having a ship in view are not that good, so I continued sampling until I had 50 land coordinates.

Based on Google Earth imagery, Borislav would definitely see clear signs of human activity in about 10 of those 50 points. Six of them were actually in cultivated fields (in Poland, Argentina, Brazil, Pakistan, and Kazakhstan). Another point was in a highway cut along the coast of French Guiana. One was in a small town deep in the Amazon, and another on a road in the Australian outback.

In another five or ten cases, Borislav might be able to see something if you looked carefully or walked a short distance; it's hard to be sure without actually visiting the points to find out what you can see. Included in this list of marginal points was the only US location on the list, a spot in the woods outside in Keachi, Louisiana—a town which, during the American Civil War, saw the creation of a contingent of 'Highlanders' complete with government-issued kilts and plaids.

Most of the points were in the middle of deserts, barren mountains, tropical jungles. or—in one case—central Antarctica. All in all, it seems like the odds of landing somewhere with human artifacts in view are about one in four to one in three—and that artifact will usually be either a field of crops or a dirt road.

If you find yourself on a beach, check the sand. Sand all over the world contains tiny grains of plastic, mostly from industrial spillage into the oceans.[2]Patricia L. Corcorana, Mark C. Biesinger, Meriem Griﬁ, Plastics and beaches: A degrading relationship. Even if you land in the water, you might still be able to spot bits of plastic debris; the ocean is covered with them, which leads to heartbreaking consequences.

If you have a CO2 meter—and you know Earth's atmospheric history—you can also detect the changes we've made to the air around you. Over the past hundred years, we've rapidly increased CO2 concentrations from less than 300 parts per million to over 400—higher than they've been in millions of years. It's not proof of technological activity, but it's a pretty good tip-off that something weird is going on.

More sensitive testing could detect human-generated aerosols, or—by testing the soils—detect the alterations we've made to the global nitrogen cycle.[3]'Although carbon dioxide may get more press, “the nitrogen cycle has been altered more than any other basic element cycle,” says John Aber, vice president for research and public service at the University of New Hampshire.' Scott Fields, Global Nitrogen: Cycling out of Control

Depending on the humidity, you may have a good chance of seeing jet contrails. Under the right conditions, these water vapor trails from planes can linger for hours. In many parts of the world, they're a common sight. However, in areas with fewer flight paths—central Africa, South America, and Australia, in particular—they might be less easy to spot. 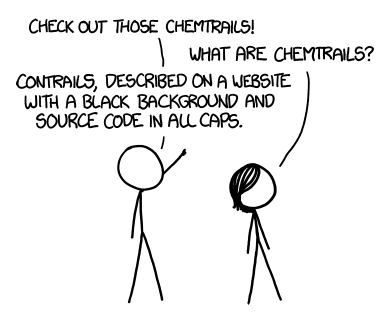 But even if you find yourself in the middle of the Algerian desert, the Peruvian Amazon, or the Arctic cliffs of Transfiguration Island, there's an easy way to see evidence of intelligent life:

Wait for nightfall.[4]And then go crazy and burn down your civilization when you see the stars for the first time.

At any given time, there are hundreds of satellites in the sky. Most of them are too faint to see, but if you're in an area without much light pollution, and you look carefully enough, there's virtually always a satellite visible. Their rapid motion across the sky and various highly inclined orbits make them unlikely to be anything but artificial.

It's often said that the Great Wall of China is the only human artifact that can be seen from space. This is wrong.

Want to see signs of intelligent life? Just look up. 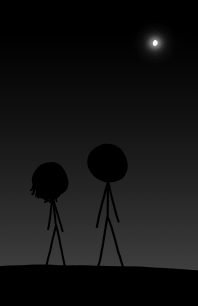