I've occasionally seen "radar enforced" on speed limit signs, and I can't help but ask: How intense would radio waves have to be to stop a car from going over the speed limit, and what would happen if this were attempted?

Not a lot of force. The average cell phone transmitter exerts about a billionth of a newton of pressure on its surroundings. That means that it would take several trillion cell phones to collectively levitate a snowflake; the pressure from one phone wouldn't even measurably slow it down. 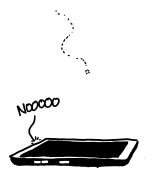 The fate of the snowflake hints at what kinds of problems our car will encounter.

If you want to slow down a one-ton car by radiation pressure, your radar gun would need to deliver about two trillion joules worth of radiation—the energy of a small nuclear weapon.[1]The formula for figuring out that amount out is simple: The energy required is equal to the desired change in speed (say, 20 mph) times the mass of the car times the speed of light. The radar gun would need to emit even more energy than that, since not all of the radiation will be absorbed (or reflected) by the car.[2]The fact that some of it is reflected makes things easier, since that doubles the momentum delivered by the radiation. This is why simple solar sails are white and not black. For more on radar reflectivity of materials, you can check out one of the worst scanned PDFs I've ever seen.

Your radar gun would also vaporize the car. This is a problem, in one sense, but it's also a solution. Even if most of the energy is reflected, the portion that was absorbed would convert the materials in the car into gas or plasma. The expanding cloud would exert a lot more pressure on the car than the radiation itself.[3]This process, called ablation, is also what got rid of the Moon in the What If #13. This is convenient—it means that we wouldn't need nearly as much energy to stop the car as we would using radiation pressure alone.

There are even simpler ways to slow down a car with radiation. For example, you could aim a radiation beam at the tires and melt them, or use the electromagnetic radiation to knock out the car's electrical systems. Or just use a laser pointer to blind the driver and hope they reflexively slow down.

Of course, you don't need any of those things. If your goal is to slow down the car—rather than to catch speeders—your radar gun doesn't need any power. You can just stand by the side of the road next to a police car holding a fake radar gun. 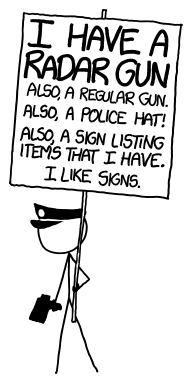 In the end, a radar gun capable of slowing cars through radiation pressure would be roughly equivalent to a nuclear weapon, and using nuclear strikes in response to traffic violations is probably overkill. It would work, in the literal sense, but it would also destroy the offender, car, police officer, road, and all other traffic for miles around.[4]It would also cause fragments of the driver to violate the speed limit in all directions at once.

Of course, maybe using the apocalyptic radar gun wouldn't be necessary; just the threat of a nuclear strike against drivers would probably deter speeding.

Come to think of it, maybe that's what those other signs you sometimes see are hinting at.