What if you were to somehow ignite the pollen that floats around in the air in spring? Other than being a really bad idea, what effect would it have?

The first thing we have to figure out is whether pollen is flammable. Some questions are best answered through academic research, but some questions can be answered much more quickly with a Youtube search. The answer is yes; pollen is extremely flammable.

(Note: Before we go any further, I want to point out that much of the US is under extreme drought, fire season is underway, and wildfires—90% of them caused by humans—kill firefighters every year. Please don't try to set pollen on fire.)

Now, back to the question.

What is fire, anyway? 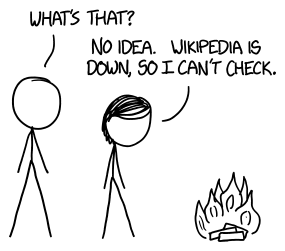 Lots of materials oxidize when exposed to air. Bananas go bad, copper turns green, iron rusts. Fire is another kind of oxidation reaction. (In other words, our cars are always oxidizing; we just try to keep it from happening suddenly.) 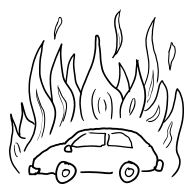 Reactions like oxidation often go faster when the fuel has more surface area.[1]This is part of what's behind the Diet Coke and Mentos effect, although the actual details are a bit more boring complicated. The more pieces you break something up into, the more surface area it has, which means that dust has a lot of surface area. Dusts can be very flammable; even normally non-flammable things like candy, milk, and iron[2]Candy, Milk, and Iron was my unsuccessful self-published follow-up to Jared Diamond's Guns, Germs, and Steel. can—when converted to powder form—combust violently in a dust explosion. Pollen can explode, too; all those Youtube videos of burning pollen show miniature dust explosions.

When it burns, it releases energy, which brings us back to Jessica's question: What if all the pollen in the air suddenly (somehow) caught fire?

As anyone with seasonal allergies will tell you, pollen is everywhere. As anyone with seasonal allergies and giant stilts will tell you, high concentrations of pollen extend upward hundreds of meters above the ground.[3]This Spanish study found pollen concentrations increased with altitude up to 600 meters. This follow-up, by a group of high school rocket enthusiasts in Madison, found that pollen increased for the the first few hundred meters, then dropped off dramatically at even higher altitudes. (Also, their rocket sampled pollen by deploying two pollen collectors dubbed—adorably—"bees".)

When pollen is burned, it releases energy. One gram of pollen releases 15 to 28 kilojoules of energy when burned, which means a handful of pollen contains roughly the same number of calories as a hamburger. 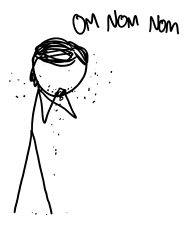 A grain of pollen weighs on the order of 10-9 grams. In areas with a high pollen count, every cubic meter of air can hold thousands of grains of tree pollen. Fortunately for Jessica's scenario, this means that—when burned—the pollen floating in the air won't have much effect at all. It would raise the air temperature by a fraction of a degree—nothing more.[4]Although it would definitely come as a nasty surprise to any bees carrying it.

The reason the pollen explosion is so mild is that the pollen is so finely spread out. What if we collected it together?

If you took all the pollen from the air across the United States, put it in a gigantic pile, and ignited it all at once, it would rapidly release on the order of 1013 joules of energy. That's about the yield of a very small nuclear weapon. 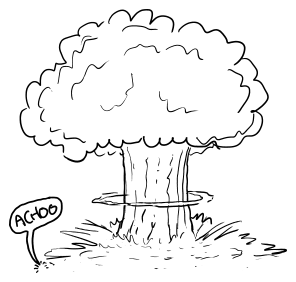 So look at it this way: Seasonal allergies may be bad, but they could be a lot worse.